This adaptation is a “what-if” episode:  what if Sherlock Holmes allowed Dr. Watson to put him on a heavy regimen of anti-depressants?

Because that’s what Everett’s literally lack-luster performance feels like: Holmes on Valium.  Lots of it.  He’s so heavy-lidded and soft-spoken throughout the entire thing–he even occasionally slurs his lines.  Usually, Everett is great for the role of an erudite character in a period piece (loved him in both An Ideal Husband and The Importance of Being Ernest), but not here.

Speaking of anti-depressants, this adaptation’s treatment of drugs is my main complaint.  The movie starts out with Holmes hanging around smoking opium.  As far as I know, he only used opium once in all of Doyle’s writings, and that was merely as part of his cover whilst looking for someone in an opium den (“The Man With the Twisted Lip”).  This would be a minor complaint, though, if they had merely replaced his “off-season” cocaine/morphine use with opium. 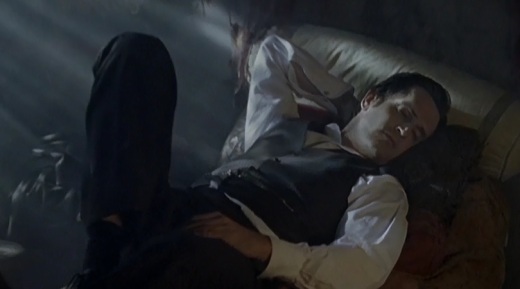 Get out of that opium den, you!

However, Case of the Silk Stocking has Holmes injecting cocaine while on the case, and he uses it to inspire himself to find the solution, no less!  Holmes doesn’t need to go on a drug-trip in order to solve cases, it’s just the opposite.  The whole point is that Holmes’ mind is so sharp that he can find what others miss and put those pieces together without the aid anything of more than some exotic tobacco (no, that’s not a euphemism).  It is only when he doesn’t have an interesting case to keep his mind occupied that he turns to narcotics.  This is a huge piece of what makes Sherlock Holmes who he is!

Substance abuse notwithstanding, the over-all story is pretty good and has a decidedly Jack the Ripper feel to it, but of course it’s Jack the Ripper Holmes-style.  Instead of prostitutes as victims, it’s young noblewomen.  Instead of violent physical mutilation, it’s a more cerebral violation of the victims and their identities.  The writers have laid out a decent mystery, including elements from various stories and some dialogue lifted directly from the original texts.

Like pretty much everything the BBC does, the production values are high and the costuming is excellent.  While I’m sure the wardrobe artists for these productions work hard, I sometimes like to imagine a huge, magical BBC costume warehouse, where the wardrobe designers go to stroll down aisle upon aisle of beautiful clothing.  They pick up a few items here and there, and then go spend the rest of the day sitting around sipping pinot grigio.  (Ok, strange fantasy, I admit.  I really just want to go play in a costume warehouse.)

Ian Hart plays a pretty solid Watson.  He doesn’t *do* anything with the role, which is good–he’s introduced the Watson Constant to this production.  The Watson Constant helps to keep the audience grounded so that we don’t get lost when a film does something odd like, say, play Holmes as an effete drug-addict. 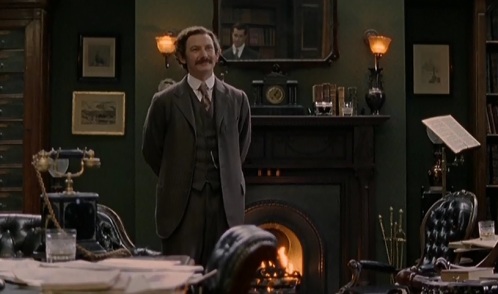 Thank you, Ian Hart, for being there for us.  For the children.

The rest of the cast is fine, but there are two who really stand-out.  One is Perdita Weeks as young Lady Roberta, in the continuing tradition of strong female characters who aid Holmes in solving cases.  The other is Michael Fassbender as a suitably creepy foot-man (go watch it and you’ll see how clever that pun is … ).

The Bottom Line: Subtract the hazy Holmes and this is a decent period-mystery. I’d mostly recommend this to anyone who wants to see Michael Fassbender acting like a psychopath, which is entertaining in its own way. 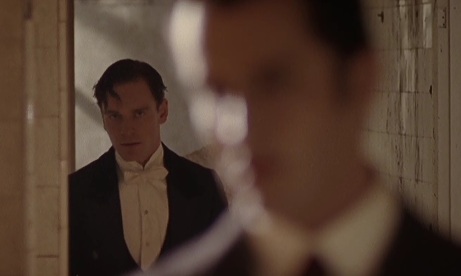 Beware the creeping Michael Fassbender over your shoulder.

Next time:  Christopher Plummer and James Mason in Murder by Decree!

This site uses Akismet to reduce spam. Learn how your comment data is processed.

I picked this Vietnamese coffee up at the local Asian grocer without knowing really what it is (I was there, I needed a new coffee to try). I didn't know it was flavored, and I don't usually like flavored coffee, but this one is kind of interesting. A good kind of interesting. It is made of both Arabica and Robusta, and has coffee flavor (coffee flavored coffee, eh?), butter flavor, and cocoa flavor. It smells heavily of chocolate when you stick your nose in the can (as I like to do), but after brewing the cocoa flavor is somewhat muted.

You could try this as a dessert coffee (though it is caffeinated), but I mostly had this in the afternoon and found it to be quite pleasant. It is also good iced, and is a nice alternative to sugary coffee drinks (although it is sugar-free it does have some fat, so check the nutrition label on it).

The butter flavor in particular may sound odd to some of us Westerners, but if you have a chance, I highly recommend trying it.

I've a life-long passion for movies, music, and books (I've only recently gotten into television). While I don't consider myself a "foodie" or "coffee snob", I definitely take my coffee seriously. I have a background in literature, history, and media studies.